Jin glaze, also spelled Jun or Chun, was perfected in the Song dynasty around the beginning of the 2nd millennium C. E.  The effect is created by iridescence, produced by droplets of undissolved liquid in the melted glaze. When these particles are the right size, penetrating light is shifted into the blue spectrum.  This is what I call Jin glaze and the ancient Chinese model remains the best, the most beautiful.  Here’s a link to some of its history: https://en.wikipedia.org/wiki/Jun_ware .
We have to clarify what we mean when we refer to a glaze by name.  Glaze names are not regulated by an international authority, as are the species of plants and animals, or vintages of wine.  People can call a glaze anything they want, and many times they do it for reasons I don’t share.  Since my work has led me to search for the most beautiful glazes that have ever been made, and to figure out how they did it, when I use an established name for a glaze, it must at least share the defining characteristics of the original glaze.  Some of my attempts to make celadon, for example, are not at the same level of perfection as Song dynasty pieces, but if it is too different from the platonic model, I wouldn’t call it celadon.  Some people do.
My temmoku glaze, my celadon, my Jin as well as my oxblood (sang de bœuf) are all recreations of glazes that were perfected in the Song dynasty.  These glazes have been copied ever since that time but I use the Song dynasty example as my model.
Sèves blue glaze is so-called because it’s designed after another model.  Sèvres is a city in central France where porcelain has been made for royalty since the middle of the 18th century, and continues to the present.  Early pieces were designed to mimic Asian wares, which was the French fashion at the time.  The shiny blue was used as a background for fine-lined polychrome decoration, done with lower fired overglazes and gold.  The point was to get it as clear and shiny as possible, in order to bring out the most brilliant cobalt color over a white clay body.  My formula is high in feldspar, lime and silica, which produces the shiniest and clearest formula I have found.
I make at least 3 versions of high-magnesia glaze, which are purple, teal and lavender, respectively.  These are opaque, and have a waxy matt finish. These glazes were apparently not discovered until the 20th century.  I feel that ancient Chinese potters would have used these colors if they had known about them. They had the materials and their firing schedule could have produced these colors but as far as I have seen they never did it.  But what do I know - maybe the emperors just didn’t like these colors.
Iron red goes back at least 200 years in Japan but I haven’t traced the history.  I’m trying for the brightest iron-red color.  Please see the home page of this web-site for notes on celadon glaze.
The colors in all my glazes are made with metallic oxides and carbonates.  These materials are not soluble in water, but they can dissolve into liquid silica when it is melted at 2,350º  F.  The reason I color them this way is because, compared to glazes which are  colored with manufactured ceramic stains, they can produce richer, brighter, deeper, more variable colors.  More beautiful color effects.  There is a lively break-up of colors and interplay of light in the glaze when the glaze body is transparent, with the colorants dissolved.
Many of these glaze effects depend on a trick of chemistry or fluid dynamics or optics.  Copper red glazes, both oxblood and Jin glazes, make brilliant colors only under very narrow chemical conditions, which occur when the materials are fully melted together in the kiln.  The atmosphere in the kiln during the firing enters into the glaze chemistry by either oxidizing or reducing those ions which are susceptible (i. e. they must have a charge and either extra electrons in their outer shell, or a hungry place for electrons). There are at least 4 oxides that copper can turn into, as well as metallic copper, and each has a different color.  All 4 copper oxides can be present in the glaze.  Brilliant color effects can be achieved when there are layers of different colors in a transparent glaze.  But the chemistry and fluid mechanics which cause this effect are so narrow that they can only be reproduced by independent research and development in each kiln.  In my experience, a different firing schedule and/or glaze recipe has to be worked out for each kiln in order to get brilliant effects with copper red glaze.
Although the primary motivation of this work is artistic (“masquerading as tableware”), the high temperature firing produces a hard, vitreous clay body (impervious to water, germs, etc.).  The glazes, fired at this temperature, are so high in silica and alumina, melted and super-cooled into a glass, that they are food safe.  Information about components of specific glazes will be provided on request.
High fired stoneware takes a lot of energy to fire - over twice as much as low fired wares.  The use of this energy has to be justified by the value of the finished product.  I also make sure the design of the piece compliments the dense, glassy material it becomes in the kiln.
​  The material is so hard that these pieces, or their fragments, will survive over a thousand years, even if the human civilization does not.  I do my utmost to insure that both I, and my civilization, will be proud to have future archaeologists find them.  I'm getting old and this is my quest for immortality. 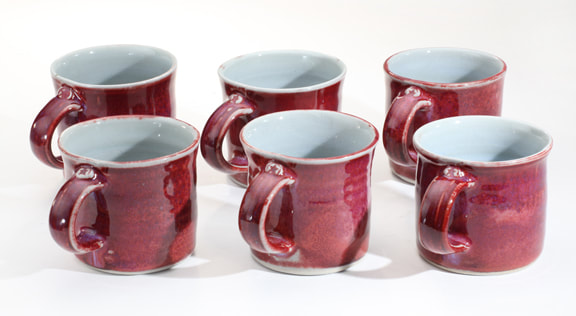